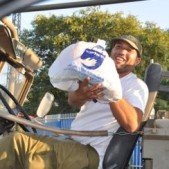 Hundreds of thousands of families in southern Israel have been forced into bomb shelters - the siren warns of approaching missiles. Life is disrupted and it has become difficult to shop for necessities or to have any daily routine. The chaos has gone on for weeks; all semblance of normalcy is gone. Of course we wanted to do something, to somehow make a difference in their lives, but how?

Etz Chaim, a synagogue in Livingston, New Jersey decided that now is a time to demonstrate solidarity with our soldiers and our families living in terror by doing something to help. Rabbi Klibanoff and Alan Schall didn’t just say that “the check is in the mail”. They flew with the funds to Israel and brainstormed with Yossi Kaufman about how the money could be best used to support “Operation Protective Edge” in Gaza. They visited army bases and toured bomb shelters to gain a better understanding of what was needed. It was apparent that in addition to physical deprivation, the families and soldiers were experiencing emotional distress. “Operation Standing Together” was created to provide care packages for soldiers and families, but more importantly to send love and support to those who are in constant danger.

This morning, in the beautifully renovated Yad Eliezer warehouse, we joined people of all ages and backgrounds who had arrived to assemble care packages for soldiers on high alert in Gaza. With each water bottle, snack and package of wipes we packed our wishes for the safety of our forces. My husband and I were directed to the group assembling boxes for families in shelters. Before beginning to pack cartons, we watched an inspiring video created by Moshe Coopersmith. It was a short documentary about the shelters and the people forced to flee their homes because of approaching missiles. We packed pickles, olives, rice, oil and other staples which would sustain and strengthen those who are living in perilous conditions.

When we traveled south to deliver the packages elderly people in wheelchairs or with walkers expressed their appreciation and happiness when receiving the good-will packages. Young children stared in disbelief when presented with shiny new toys to keep them occupied when they sat for hours at a time in the bomb shelter. We felt so strongly the power of Am Yisrael- “We will endure, we will survive, Am Yisrael Chai! “It was a true privilege to be part of this worthy effort- one that I will never forget.

Being a part of Yad Eliezer's activities was a highlight of my trip to Israel. If you get involved with Yad Eliezer you will understand why!