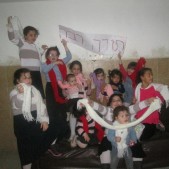 Warmth in the Cold

Born in Poland before WWII Yehudis was surrounded her warm and prestigious family. She was married at a young age, and was soon the proud mother of two beautiful daughters. Her life was soon tragically interrupted as the Nazis invaded Poland, murdering her father and brothers. Yehudis, her husband and young daughters escaped for their lives, trecking by foot to the forest of Siberia. When they reached their destination, they were no longer within reach of the blood-thirsty Nazis, but the natural elements could be nearly as cruel. Survival in the sub-zero tempuratures was a daily and sometimes hourly struggle, and by the time the war was over, Yehudis remained alone with her older daughter, having lost almost her entire family in a few short years.

Yehudis was a survivor, determined to rebuild her life. She was remarried in a DP camp in Germany, and together with her new husband, her daughter, and an infant son, she immigrated to Sidney Australia.

Daniel Meyer, Yehudis's grandson shares, "My grandmother spent her later years knitting. Answering a call in the local Jewish Newspaper, she knitted over 200 blankets for the residents of the local Jewish nursing homes. She then went on the knit hundreds of scarves for the brave IDF soldiers and others in need. When my grandmother passed away, my mother had many boxes that my grandmother had knitted. Knowing how my grandmother loved to give to others, and that she was a passionate supporter of Israel, the boxes were shipped to Israel where they were distributed to children from low-income families through Yad Eliezer, and to IDF soldiers."

As Chanukah approaches and the cold weather sets in, hundreds of beautiful hand-knit scarves were distributed to families in need.