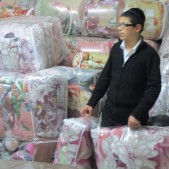 Thanks to the help of our generous donors, Yad Eliezer has distributed 6873 top quality children’s coats and 8546 warm winter comforters in recent months. We were able to complete this distribution with virtually no overhead, thanks to our community coordinators in dozens of cities throughout Israel. Our volunteer from Hadera shared some of his experiences having distributed the blankets in his community:

1. "There is a family in my area that is very poor. Each week my wife bakes a tray of chicken wings and the father comes and picks it up so that the family will have some chicken for Shabbos (their only meat meal of the week). This week the father didn’t come, and I wondered the whole shabbos what happened. When I met him in the middle of the week he told me that he, his wife and five children were bitterly hungry the whole shabbos, but the humiliation of asking for food was stronger than his hunger. I gave him a big package of chicken for them to prepare in their own home, and blankets to keep the children warm.

2. "A family asked me if I could help them. A window in their home broke and the cold winter air was making their home frigid. They didn’t have the means to pay to fix the window. When I arrived at their home I was horrified to find that indeed the apartment was freezing, and two small children under the age of three were in bed together sharing a torn and tattered blanket. Their noses were red and dripping... no surprise given how cold the apartment was. I immediately called a repairman to fix the window, and brought new blankets for the children. I also gave them a heater and $100 to pay the heating bill.

3. "A young bride and groom, both from very poor families are getting married soon. The father of the bride told me that his daughter hasn’t received any of the traditional gifts, not an engagement ring, or even a bouquet of flowers. Neither the bride nor the groom have been able to purchase new clothing, house wares or linens. At least I was able to give them blankets.

4. "A father of a few young children checked all of the relevant stores in Hadera looking for winter blankets for his family that would be high enough quality to keep them warm during the cold nights as he doesn’t have the means to heat the home at night. None of the stores had blankets that were warm enough at a price he could afford. On his way home feeling rather despondent we bumped into each other. I’ll let you guess the end of the story..."

These are only four of the stories of the 8546 quilts that we distributed. It all would have been worthwhile just for one of these stories, all the more so when we consider the health and wellbeing of the thousands of recipients who benefitted from your generosity.