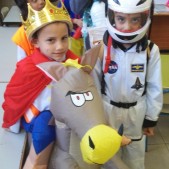 This Purim we raised more money than ever, and distributed it all in the 48 hours during which Purim was celebrated in Israel. The phones were ringing non-stop as volunteers from America, Australia, England, and other countries throughout the world raised money on Purim to help families in Israel. In order to fulfill the mitzvah of matanos le'evyonim, the money was all distributed the very same day in the form of checks and food vouchers: $400,000 on Purim in cities throughout Israel, and $107,000 on Shushan Purim in Jerusalem. As the money came in, our staff was in touch with community volunteers throughout Israel who passed the tzedaka on to single mothers, people suffering from health issues, and other individuals and families in need. This undertaking wouldn't have been possible without the help and generosity of over 1200 donors and of dozens of volunteers who worked tirelessly to make this the best Purim ever.

May the joy of Purim and the joy of giving accompany us all throughout the year!