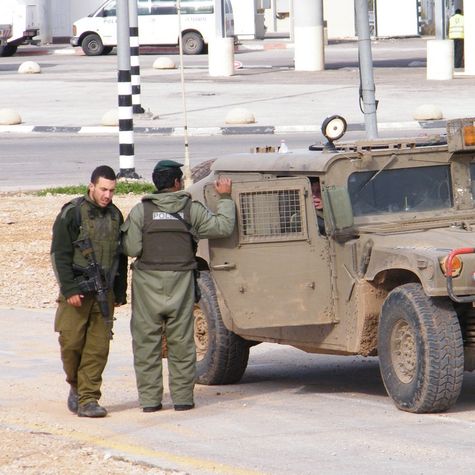 Giving it a Second Thought-What Goes on in the Personal Lives of IDF Soldiers?

Many are Impoverished but Yad Eliezer is There to Help

I was driving into Jerusalem a couple of weeks ago and as I always do on my way into the city, like everyone else in front of my car and behind it, passed through a security checkpoint. It isn't that noticeable of an event. You approach the checkpoint, the soldiers on guard (basically kids in their early 20s) take a look at you, glance at your car, and either wave you on or ask a couple of questions.


"Where are you heading today?"
"Do you live in the area?" - things like that.

Usually the whole process takes about five to ten seconds. Sometimes there's a bit of a wait to pass through (think rush hour) and occasionally, if there’s been a security incident, it takes longer. Though I have one nephew in the IDF plus many friends whose kids are serving, I don't personally know any of the ones who often man that specific checkpoint. But as I pass through, I think about how grateful I am that they‘re there, watching out for and protecting me and everyone else who is using that road.


Other things that come to mind

Something else I think about is the soldiers themselves. How on hot days, in weather that makes no human want to step foot outside, they’re standing there, weighed down with kilos of equipment, dedicatedly doing their jobs. The same on frigid days (and nights) when the wind blows so hard it makes the rain hit you in the face. I think about how young some of them are-that one on the right looks like he just graduated high school yesterday.  And the older one with the wedding ring on the hand that’s holding his gun-does he have kids?

But I’ll admit, that used to be the extent of it. And as I passed through the checkpoint I always gave them a friendly wave and a thank you, then headed on my way.

And then I started working at Yad Eliezer.
And I was introduced to a whole new dimension in the lives of IDF soldiers that I hadn’t given too much thought to.
Money.
Or, more accurately, lack thereof.
I quickly learned about the issue of poverty in the IDF. Well, not in the IDF itself but in the personal lives of thousands of soldiers who serve in it. I learned first hand about soldiers who come from impoverished backgrounds-the ones that hesitate to go home when they’re given leave, because the situation there is too strained.

IDF Soldiers in need - their stories are varied

I learned about the ones who have their own families, but can’t afford to buy food for them on a regular basis.

I spoke to the father of one chayal who suffers so badly from war-related injuries and PTSD that his parents spend most of their time trying to get him appropriate treatment, going into debt themselves from the costs of working to help their son.

Another soldier describes how he must go to his second job whenever he has “time off” from service-meaning in the evenings after a day in the army and on his “out” weekends.Yamit, the mother of another soldier, is undergoing chemo and her husband works less in order to run their home and take care of their younger kids. Less work means less income and Yamit worries doubly about her chayal son: first, that he’s on the Syrian border and second, that after he travels home for hours from long, hard weeks of serving, there won’t be anything to feed him.

It’s hard to comprehend that so many men and women, who appear so strong and powerful in their work, are suffering terribly in their personal lives. But they do. And on holidays, when many of their peers are home, happily celebrating with their families, the soldiers who suffer during the year, do so even more.

What can be done?

There is a comfort, though, knowing that people and organizations are out there, providing help. Yad Eliezer is one of them. Every High Holiday season and every Pesach, we run our IDF Holiday campaign, which provides thousands of dollars worth of food aid for these soldiers. They come in the form of gift cards, so any soldier can walk into the store and pay for their purchases easily, without anyone knowing that they were helped by an organization.

The help is invaluable.
The soldier that hesitated to go home to his parents for the holidays can use the cards himself, even bringing some groceries with him when he comes through the front door.
The ones that worried about providing for their own families, now can. The parents who want to feed their kids when they return on leave, can shop with a lighter heart.

We get countless thank you notes and messages that express what a difference the assistance makes.
“I’m proud to serve in the Givati unit-but this year I was also proud to be able to celebrate the holiday with a full table”
“I don’t know what we would have done without your help-thank you”
“The tlushim enabled me and my family to feel like it was really a holiday..”

The army commanders, who know their soldiers well and work with us to coordinate distribution of the gift cards to their neediest men and women also express their appreciation:
“Please pass on my thanks to your donors, for looking out for my soldiers, who work so hard to protect Israel’s citizens-you are all really bringing them relief”

So the next time you pass through a checkpoint, sit next to a sleeping soldier on the bus, read about about a military operation in the news or watch an IDF story online, try to think about that something you might not usually think about...
I will too.

Want to help one of 3,700 IDF soldiers in need this High Holiday season? Join us!