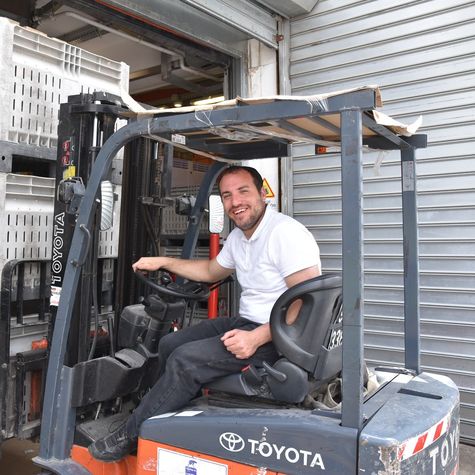 The Faces Behind Yad Eliezer, part 2

Yad Eliezer, one of the top Israeli charities, has top people working behind the scenes

A few weeks ago we introduced you to Milka, one of Yad Eliezer’s critical staff members who works dedicatedly behind the scenes to get people the help they need. This week, we’d like you to meet Nachum, who manages our Jerusalem food boxes warehouse, the hub of all food aid that Yad Eliezer distributes and the host location for our incredible volunteers who pack those food boxes for the thousands of families that receive them each month.


What was your first job at Yad Eliezer?
I first started at Yad Eliezer when I was just 15, as a volunteer. I helped the delivery drivers distribute food boxes to recipients. Once I got my driver’s license, I worked as a driver myself. From there, I went on to become manager of the warehouse.

What’s your favorite part of your job?
Meeting volunteers from all over the world and seeing how much people enjoy helping one another.

Can you give us some insight into Yad Eliezer’s volunteers?
People from all over the world often come to volunteer as part of different types of celebrations. One time during Chanukah, for example, a large family came from Australia, that was celebrating their grandfather’s 90th birthday. Almost every week we have bar and bat mitzvahs. There are also more emotional events held here. The maggid shir of a different yeshiva would come with his students to pack with us every year. Tragically, last year as he was making his way to the Kotel on Hoshana Rabba, he was killed in a terrorist attack. Shortly afterwards, the yeshiva came back to volunteer l’ilui nishmato. They packed food boxes, sang and learned Torah in his zchut.

What is something people outside Yad Eliezer should know?
I think it is important for people to know that Yad Eliezer is really dedicated to helping people as practically as possible. Three years ago, we did a survey among families who received food assistance. We asked them which products they would like to see included in the boxes-which they preferred and which they were less inclined to use. We went through all the surveys and based on the information collected from these people, the ones who really benefited from our food boxes, I adjusted the contents accordingly.

Our goal at Yad Eliezer is to do our best to make sure any help we provide (whether it’s for food aid or mentoring, helping with simcha costs, support for single mothers or the many other forms of assistance we offer) is the best, most effective and far reaching, we can extend. It’s what we’ve been doing for decades.