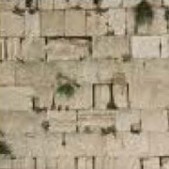 Touching the Kotel From Far Away

The Kotel looms large and golden above you. You reach out your hand to touch the stones. Soft vibrancy runs through your body. You are touching the history of your people. You are connecting with eternity.

Now picture a very different scene. Penina*, a middle-aged single mother, lies in a hospital bed in theHadassah Ein Kerem Medical Center, miles away from the brilliant Old City. Her body is exhausted. Aches and pains assail her legs, her back, and other limbs. Treatment for cancer can be aggressive, dramatic, and above all, frightening.

Penina doesn’t know who she can turn to. Her children do the best they can to help, but they are coping with their own emotions. She wishes she could reach out and touch the soft, golden stones of the Kotel where all Israelis, and Jews from the world over, turn in times of trouble.

She remembers only a few months ago when she visited during after one hot summer day. Twilight was falling and a cool breeze was replacing the sweltering afternoon. Penina picked up a worn book of Tehillim (Psalms) and began to whisper the ancient words. Comfort coursed through her. She felt her heart beating within, the blood of Abraham, Isaac, and Jacob, a living connection with the God they had lived and died for.

Penina sighs as she remembers those days long ago. She had closed up the book of Tehillim with a smile, reached up to give the Kotel a final caress, and had started home content in the knowledge that she had made a connection with Someone greater than herself. But here in the cold halls of Hadassah Ein Kerem, G-d seems so far away.

Suddenly, Penina’s reverie is interrupted by the ring of a phone. The cell phone at her bedside has begun to vibrate urgently. Glancing at the screen, Penina sees the number of Rabbi Yitzchak Weingott, the director of Yad Eliezer’s Medical Support Program. When Penina was first admitted to the hospital, Yitzchak coordinated food boxes to aid her family while treatments ate away at their financial resources. He directed them to the Big Brothers and Big Sisters program where her children, especially her girls, received mentors to help them get through the hardest times they had ever faced.

Most importantly, Yitzchak had given Penina the most precious gift of all: hope. Sharing his own story of cancer and recovery, Yitzchak and Yad Eliezer had infused Penina with a new vision of how the future could be.

Penina reaches over to gingerly pick up the phone between weak fingers. “Yitzchak?” she greets him.

“Shalom Penina,” says Yitzchak Weingott, “I am standing by the Kotel. I will hold my phone up to the stones. Would you like to say a few words?”

Tears begin trickling down Penina’s face as Yitzchak’s kindness strikes at her heart. “It’s like you’re right here, Penina,” he tells her.

Penina wipes away her tears and smiles. The worst part of cancer, the fear, is over. Penina knows she is not alone. Yad Eliezer is there to help her. “How can I thank you?,” she whispers.