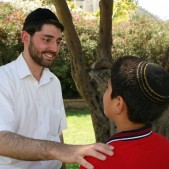 Hunger of the Spirit

When financial straits forced Yad Eliezer to consider closing the Big Brothers and Big Sisters program in 1999, word got around to Rav Chaim Kanievski. Rav Chaim, as he is affectionately known, is one of the greatest Torah scholars of his generation. The telephone rang in the Yad Eliezer offices one morning shortly after the decision had finally been made to close the program. It was Rav Chaim’s son.

“Here in Israel, people don’t die of physical hunger very often, but of spiritual hunger many die,” he relayed. Rav Chaim advised to do anything it took to keep the Big Brothers and Big Sisters program alive.

It’s easy to be wowed by the numbers, but what is more impressive is the cumulative effect this program is having on Israeli society. Since Yad Eliezer’s Big Brothers and Big Sisters program began in 1998, municipalities around the country have tracked significantly lowered crime rates for juvenile felony.

Want to have real impact on a troubled society? Take next year’s criminal and make him a positive, contributing member of the community instead.

“We purposefully work with the younger kids,” explains Zolly Tropper, CEO of American Friends of Yad Eliezer with his wife Sori. “Many mentoring programs only begin once the kid is in trouble, once they have hit thirteen to sixteen and already obviously need help. We get involved with kids ages seven to thirteen, before the symptoms have begun. We stop the trouble before it has begun.”

And families can barely express how grateful they are. Many Yad Eliezer kids struggle with troubled parents or absentee fathers. But some come from homes beset by circumstances beyond the parents’ control.

Take Aharon* whose widowed mother gave everything in her means to keep him off the streets, but still found herself swimming against the tide. When Aharon began yeshiva middle school, he started falling behind his class in Talmud study, one of the major focuses of the curriculum. Aharon might have become the class reject if it hadn’t been for his Yad Eliezer mentor who stepped in as a father figure in all respects, including Talmud tutor, at just the right moment.

Or take Leah* whose mother discovered the lump in her chest when she was six and whose later diagnosis and hospitalization sent the whole family into a tailspin. Leah missed her dad almost as much as she missed her mom since dad spent so much time driving back and forth to the hospital and managing bureaucracy between his regular working hours that she almost never saw him anymore. Leah could easily have become a statistic if her Yad Eliezer mentor hadn’t been there to shoulder the burden and provide a shoulder to cry on.

Yad Eliezer isn’t only there to alleviate physical hunger. The hunger of the spirit can be just as painful and just as destructive. Alleviate that and you see statistics changing, crime rates curbing, and kids wiping away their tears. Yad Eliezer kids have gone on to become rabbis, professionals, and leading members in their communities. It looks like Rav Chaim was right.