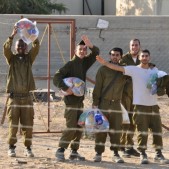 Yad Eliezer On the Front Lines


As news of the ceasefire was going to press residents of southern Israel were still unsure of their footing. Would the ceasefire hold? Would schools resume? Would it be safe to return to normal life?

At Yad Eliezer we realized that come what may, families from the south were still in need of our help and support. For communities that are considered poor under the best of circumstances, after a week of not working or going shopping, there was precious little food in their homes. Generous donations from our supporters at the Beth Jacob synagogue of Beverly Hills led by Rabbi Kalman Topp, and the East Hills synagogue of Englewood New Jersey led by Rabbi Ze’ev Reichman translated into 500 boxes of food staples and 400 bags of goodies for kids. Yossi Kaufman, Yad Eliezer’s Director of Public Relations headed south together with Geoffrey Rochwarger, Simon Wolf, and others, together with Shloimi Roth who drives Yad Eliezer’s 11 ton truck when he is not needed behind the wheel of a tank. The first stop was at an army base near the border of Gaza where Geoffrey’s nephew, Eli Korn was stationed. The soldiers had been there on high alert for the previous week, and were extremely grateful for the hot meals and drinks that were delivered to them. The Yad Eliezer entourage was privileged to visit the many soldiers who deeply appreciated the company.

The next stop was Kiriyat Malachi where our mission was greeted by the mayor and vice Mayor of the city, as well as representatives of the social services, and soldiers from the home front command. The residents of Kiriyat Malachi were grateful for the practical relief that the food boxes brought, and deeply touched to see that Jews all over the world were thinking of them and doing what they could to help. It was very moving to see the soldiers helping our volunteers unpack the many food boxes into a bomb shelter until the families could come and retrieve them. There was a great feeling of relief that the shelter could be used to temporarily store the many boxes, and that was no longer needed for cover!

From there most of the group returned to Jerusalem, and Shloimi Roth continued on to Ofakim where the remaining hundred boxes were delivered to grateful families.

As life begins to return to its normal routine after the end of Operation Pillar of Cloud Yad Eliezer would like to thank our many generous donors who helped us provide essential support for residents in the south. Whether it was the food vouchers, the trip to the zoo, or the care packages delivered to the bomb shelters, it was your generous help that allowed us to be there for our brothers in their time of need.