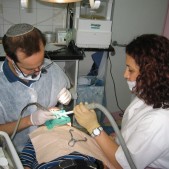 
One more short story about dental work. At one point Yad Eliezer was contacted by Hadassa Hospital’s dental hygienist school. Their trainees were looking for people interested in free dental cleaning. Of course there were plenty of people happy to take advantage of the opportunity. Rivka was one of them.

Milka received a very anxious call from one of the practicing dental hygienists. “I’ve never seen anything like this. I hardly touched her mouth to start the cleaning, and one of her teeth fell out. A minute later, another tooth. This woman is clearly suffering from extreme malnutrition. You’ve got to do something to help her!”

Milka travelled to visit Rivka’s home. It was in a depressing trailer park. Her teenage son sat outside staring into space, even though it was school hours. Nothing prepared her for what she saw when she stepped inside. She couldn’t tell what area was the kitchen, what was a bedroom and what was the bathroom. The smell and the disorder were overwhelming. A blackened pot sat on the stove; Rivka mentioned that a few days earlier her daughter had meant to heat up some food, and forgot about it, and nobody had bothered to do anything about it.

The Sages say that one mitzvah leads to another. In this story it is so clear. The dental hygienist looked for people really in need in order to get her experience, care and concern led to the family getting helped with its immediate needs, which led to getting others involved in finding them work and getting them back on their feet.

Amazing how much difference a little care and concern can make!