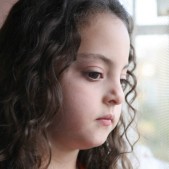 When Shira was born, she was a beautiful pleasant baby. At first there were no signs of Rett Syndrome. When she was about seven months old, her development slowed, and something seemed to be off. She wasn’t making eye contact, she no longer seemed to have control of her hand movements, and she would cry inconsolably. A visit to the doctor confirmed that she had stopped growing, and tests were ordered. It was a number of long and frustrating months before the heartbreaking diagnosis was reached. Shira was born with a mutated gene. She has Rett syndrome.

The prognosis was dismal, digestive abnormalities, brain abnormalities, sensory problems, loss of speech, poor control of hands and feet, screaming fits, uncontrollable crying and almost no ability to communicate. Shira’s family chose to step up to the challenge. They did extensive research to find anything that might help their Shira. With time Shira was able to take a few steps on her own. The family poured all of their meager resources into Shira’s treatment with the hope of someday being able to communicate with their daughter.

Recently Shira’s parents learned about a special computer program that was created to help children like Shira communicate. Large pictures are displayed on a touch screen, allowing a nonverbal child to communicate her needs and desires by touching the pictures on the screen. With time the program can help her to progress and express more subtle desires and feelings.

Shira is seven years old. She sits in first grade every day with the help of a ‘shadow’, yet no one knows if she understands anything she hears. She simply cannot communicate.

Shira’s family was filled with hope when they heard about the new computer program. Together with the help of friends and family and with some loans they purchased a computer that would support the program, but there were no resources left for the program itself.

A community activist who was familiar with the family and all of that they had invested in trying to help their daughter, contacted Yad Eliezer to get help in purchasing the program and fulfilling their dream of communicating with Shira. Thanks to a generous donor, the money is being transferred today. Yad Eliezer is honored to be able to help Shira and her family understand each other for the first time.