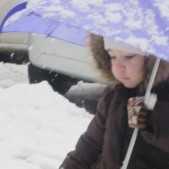 I understand that many people will be asking you about the conditions in Israel with the blanket campaign going on, so I thought you might be interested in hearing from me, as a single mother in Jerusalem, what it's been like over here. I'm not writing this to you to complain or to get sympathy, just so that the people who are donating understand how much their help is needed.

I am writing now from my kitchen table where I am sitting and typing (rather clumsily) in my winter coat and gloves. The house is freezing. The kids are wearing as many layers as I could convince them to, and I'm just hoping that they don't get too dirty because there is no hot water for baths or enough electricity to run the washing machine.
It started on Thursday morning. Schools were open, but snow was coming down, and I understood that if I sent them I would just have to go and pick them up again in an hour, so I let them stay home. At first the snow was exciting, we watched out the window as it started to accumulate, listened to music and played games. My home is very pleasant during the summer, but it the winter it is not well insulated and nearly impossible to heat. We spent most of the time in the entrance way and my bedroom, which are the only rooms that stay warm. By 10:30 there was enough snow on the ground that traffic was slowing down. The snow was coming down in huge white globs, and I was wondering when my son would come home from Yeshiva. He learns in Ramot, which is a long way from Geula in this weather. There was no answer at the yeshiva when I called. At 11:30 he walked in the door frozen and wet. He had walked most of the way from Ramot (Over an hour walk!) carrying his bag of books and his tefillin. The books had a layer of snow on the top of the bag, and thank G-d his tefillin were protected by the nylon zipped bag.

It was clear that the storm was only going to get worse, so I left my son home with the younger kids and ran to the makolet, hoping that it would still be open and I would be able to get everything that I need for shabbos. I bought supplies to bake challah at home, rightly assuming that many of the bakeries would be closed on Friday. Just making my way home from the makolet with my shopping was an adventure. All of the trees on the main street of Geula were bent over from the weight of the snow.

We made it through the day and had most of Shabbos cooked by Thursday night. That night we brought all of the mattresses and blankets in to my room along with the electric radiator (the mazgan doesn't work when the temp gets close to zero, or if it is covered by snow). My room is about 4x5 meters, it was a little tight with all 5 kids, but we pretended that it's succos and were still excited enough about the snow not to be bothered by the inconvenience.

When I woke up in the morning I noticed right away that it was colder than I expected. I peeked out the window and saw more snow than I had ever seen. And I grew up in Philadelphia! I got up and turned on the lights in the hallway and kitchen, but nothing happened. The bathroom light did turn on. It took a few minutes until I realized that the electricity was working, but at less than half of the usual strength. The electric kettle took 20 minutes to boil instead of it's usual 3. The fluorescent lights wouldn't turn on, The freezer was not as cold as it should have been. (My son later filled large plastic bags with snow and packed them into the freezer- they're still there now) I had turned on the hot water boiler at 3 AMso that we would have hot water in order to prepare for shabbos. The electricity in the apartment can't support more than 2 heat producing appliances. If I want to cook and have the heating on, the boiler needs to work at different hours. But when I opened the hot water faucet instead of the scalding water that I expected, the water was barely luke warm. Ok, no baths or showers. Or washing dishes. I realized that the oven wouldn't get hot enough to bake challahs so we made pitot in frying pans. The hardest part was the cold. The electric radiator was on the highest setting, but not hot enough to combat the cold. The kitchen is so poorly insulated that condensations accumulates on the walls and the floor tiles. The kids thought it was cool that they could see their breath inside the house, but I was not impressed. I kept hoping the the electricity would come back any minute, but it didn't. I made the kids put their jackets on over all of the layers that they were already wearing. Close to shabbos we heard that the eiruv had fallen. The snow was still coming down.

I realized that the electric hot plate that I usually use would not keep the food hot with the minimal electricity, so I took some heavy pesach tin foil and improvised a blech to put on the gas stove. We ate shabbos dinner in the hallway, and only after the meal I noticed that the gas had gone out. Thankfully, one of the neighbors was able to fit our chullent onto their stove. Again we went to bed early again all six of us on four mattresses in my room.

Shabbos morning we woke up to a freezing apartment and tons of snow outside. I saw that the heater was barely strong enough to keep the bedroom warm, so we stayed in the room with the door closed. We read stories, played lego davened together, sang songs, jumped on mattresses. I tried to keep on smiling, but I was definitely getting worried about the little wet red noses. When my son came home from shul we moved the mattresses to the side and ate the pitot and chullent in the 'sukkah'. The kids brought some chullent to the elderly lady downstairs who had no lights, heating, or hot shabbos food. We were lucky to have any electricity at all.
Motzei Shabbos I took out the guitar and played for a good half an hour. The kids sang and danced until they were warm and tired and collapsed back into the mattresses in the 'sukkah'.

Today the sun came out, and there is no more snow coming down, the the streets are packed with ice. After three days home, mostly in one small room with the kids I desperately needed to get out. I figured that if some of the stores were open then the post office would surely be open, and I could pick up a package that my step mother had sent. My son sat the kids down to play monopoly and I set out for the post office. I had an adventure. I saw store owners trying to clear away snow and ice with brooms and sponja sticks, not very successfully. I saw a young charedi man helping an elderly lady walk down the iced streets. The main streets of Yechezkel and Malchei Yisrael are clear enough for some traffic to get through, but I saw plenty of cars with 4 wheel drive and even with improvised chains spinning their wheels in the snow and ice. The sidewalks are covered in 4-6 inches of packed snow/ice. I didn't see any snow salt or snow shovels at all. When I got to the post office there was a huge drift of snow against the door and a sign that said, 'The post office will reopen if(!?) public transportation resumes.' Oh well, at least I got some fresh air. I stopped at the makolet on the way home and picked up a loaf of bread. I wanted to buy also milk, but none had been delivered.

I tried to call the electric company to find out when normal service would be restored, but there is only a recording that says 'in case of emergency call...' There are fallen trees all over the place, including a huge tree that fell right behind our building onto an electric wire, breaking down the metal and concrete fence of my neighbor's yard.
I'm trying to be a trooper and keep the kids in good spirits, but I am very much looking forward to heating, laundry, dishes, and all of the normal stuff of life! I keep on checking online, but nobody is saying when busses, schools and normal electricity will resume.

Is there some sort of safe, cost efficient way to heat an apartment without electricity? Some friends in Tzfat where there was half a meter of snow have wood burning stoves, so they are getting by ok without electricity. I heard about families in Yerushalayim who lit barbeques in their homes! (I would never do such a thing!) I'm not sure what the answer is.

A friend on mine had a baby on Thursday. She was told right after shabbos that she needed to leave the hospital to make room for the many emergency cases that were coming in. There were dozens of mothers sitting in the nursing room with their newborn infants and no way to get home. Eventually the brother in law of another friend picked her up in his truck to take her home, but she still needed to walk the last two blocks by foot as she lives on a side street that hasn't been cleared at all.
Thank you for everything that you are doing for the blanket campaign. It is scary to see how powerless we are to care for our families under these circumstances, and having warm blankets is the one thing that can help even when there is no electricity.
I hope to share good news soon (like having normal electricity and heating back!)
Take care and stay warm!