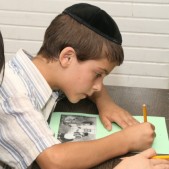 The Big Brothers program started with a few loving adults getting together to make a difference in the lives of children from high-risk homes. These kids often didn’t have enough food or clothing until Yad Eliezer got involved, but more importantly, they didn’t have enough warmth, attention, and love. Big Brothers and Big Sisters filled the gap where hungry hearts might have led to criminality or life on the streets.

But Big Brothers cry, too. One Big Brother, a man in his thirties with a young family, visited program director Rafi Kugler one day with tears in his eyes.

“My own child is in third grade,” he told Rafi. “We just got a letter from the principal. He basically told us that Chaim* is a nice kid but he doesn’t understand the material. He said that Chaim seems to have a psychological problem... Can you recommend anyone?”

A $600 psychological evaluation ensured his worried parents that Chaim’s psyche was just fine, but that he might have a didactic problem. A second test, at $300, revealed Chaim’s learning disability. When Chaim’s parents went back to the principal to report the results of the evaluations and to ask for help, the principal reluctantly admitted that, yes, the school could offer help in the form of a private tutor, but it would cost the family at least 700 shekels a month.

Chaim’s parents weren’t impoverished, but they simply didn’t have the money for such a significant additional monthly expenditure. It was a terrible position to be in. After all, what would Chaim’s life become if he could never learn how to read? Educationally and socially, Chaim would fall way behind. Shame and frustration would color his days, and his future could be mediocre at best – and criminal at worst. Without learning how to read, Chaim’s future would end in third grade.

It didn’t take long for Rafi to realize that thousands of parents face these challenges. Intervening in a learning disability is costly, but the dividends for children, families, and society are priceless. It seemed that for some kids, even having a warm and loving Big Brother wasn’t enough. Giving all Israeli children a healthy future meant diagnosing and treating learning disabilities, too. And the Shalhevet Early Learning Initiative was born.

Shalhevet is the only program of its kind in Israel. Instead of structuring private tutoring into tired, grumpy afternoons after a long day of regular school classes, Shalhevet works inside affiliated schools to team elementary school students with tutors during morning hours when kids are at their most alert and receptive.

Shalhevet also maintains on-going contact with principals and other school staff members in order to ensure that all possible learning disabilities are caught early on. Shalhevet’s team of evaluating professionals visit schools regularly to evaluate kids who may be struggling with these issues. Early diagnosis and tutoring stops what otherwise often becomes a slippery slide down into serious educational, social, and emotional problems.

Most importantly, these services are offered at very little cost to parents, ensuring that every child is given the tools he or she needs to succeed.

You can change that. Donate to the Yad Eliezer Shalhevet Early Learning Initiative. Make a difference for a child today.