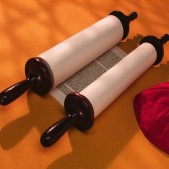 It was only days before Shavuot, and the wedding date was fast approaching. Ruth's young face was clear and pure, there was no evidence of the pain that had been her constant companion since childhood. Abandoned by her parents as an infant, Ruth was raised in a Ukrainian orphanage until she was 12 years old and came to Israel on a Youth Aliya program. She was sent to a secular boarding school, but somehow even at that age, Ruth knew that something was missing from her life. There were many challenges in her path, but Ruth's search continued. When she was 16 years old Ruth showed up in the steps of Bnot Tzion, a religious boarding school in Jerusalem for young women from Russia and the Ukraine. Despite having no previous religious education she insisted that Bnot Tzion would be her new home. Drawn in by her dedication and genuine desire to grow, the staff adopted Ruth and gave her the love and support that she had been lacking.

When Ruth was 19 she was introduced to Moshe, a young man her age whose background and devotedness matched her own. They decided to get married, and with the help of the staffs of both of their schools they were able to put together enough money for the first few months' rent on a small apartment. But there was no money for the wedding, new clothing, or furnishings. The wedding would take place in two weeks, but what sort of celebration would it me?

Ruth walked into the door of Yad Eliezer hoping to receive a bit of help. Maybe she would get enough money to buy a new dress or an electric kettle...

Milka greeted Ruth and heard her story, which she quickly verified with an old friend of hers who was once a staff member at Bnot Tzion. She was told of Ruth's strength of character, of her intellectual, spiritual and emotional growth, and of the challenges Ruth had faced in her life. Milka made a few phone calls and was able to amass a sum that would allow Ruth to buy the basics that she needed for her home, and have a modest wedding celebration. Ruth cried tears of joy, overwhelmed by the care and support that she felt, way beyond her expectations. As Milka arranged the details and the paperwork, the phone rang. A regular donor from the USA had celebrated the engagement of his daughter, and in honor of the celebration he wanted to help a poor bride in Israel. He donated enough money to cover the first year's rent for Ruth's new home!

As I write, Shavuot is around the corner. I want to make a new beginning, to rededicate myself to the principals most important to me. Spring is in the air, new hope is in bloom.

Am Yisrael are preparing to receive the Torah. What a gift! I sort through my guest lists and recipes, but when I think of Ruth, I can’t help but wonder- where is my own personal recipe to bring joy, wholeness and holiness into the life of another.